SCORES FEARED DEAD AS ANOTHER BOAT CAPSIZES OFF LIBYA


Rescue effort under way in the Mediterranean, with only 23 rescued so far from a boat carrying more than 120 people.
 
Around 100 people are feared drowned in the Mediterranean Sea after a dinghy capsized off Libya, according to rescue teams frantically searching for survivors in darkness and rough seas. 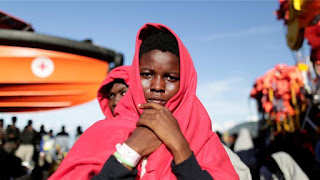 Rescuers and the Italian coastguard said on Tuesday that they had recovered seven bodies.

According to German NGO Jugend Rettet, which has a boat in the Mediterranean, 23 survivors had been rescued by an oil tanker which was first to reach the stricken dinghy.

 
The survivors and four of the recovered bodies were transferred from the tanker to the Aquarius, a boat operated by another charity group, SOS Mediterranee.

A survivor told one of that organisation's staff that the dinghy had begun to sink at 6am, four hours before the arrival of the tanker.


"We were 122 on the boat, no children under 15, but there were 10 women travelling with us and only one survived," the recued man was quoted as saying.

 
"We waited in the water, taking any floating thing to remain afloat, but most of the people drowned, including my little brother. He was 15.

"At 10, the tanker came and rescued us. I want to call home to tell them that my brother died."

Attempts to find any survivors were continuing but were being hampered by very rough conditions and the chances of finding anyone alive appeared slim.

Source: Aljazeera.
By Solomon Isa at November 16, 2016
Email ThisBlogThis!Share to TwitterShare to FacebookShare to Pinterest