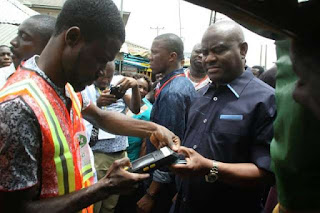 The agency's boss also threatened to remove the name of any youth found disrupting the rerun elections.
Governor Nyesom Wike at a polling booth during the just concluded Rivers rerun election held on Saturday, March 19, 2016. (DailyPost) The Amnesty office has warned Rivers state youths ahead of the December 10, 2016 rerun election to stay away from violence.
The agency, which is in charge of
rehabilitating repentant militants also threatened to remove the name of anyone found disrupting elections.

According to Daily Post, the coordinator of the Presidential Amnesty Programme, Brig. Gen. Paul Boroh, said there have been reports of violence in some areas in Rivers state.
A statement issued by the Amnesty office reads: “The Presidential Amnesty Programme is saddened by the circle of electoral violence cracking up Rivers State. “This has become more pronounced as preparations for the re-run elections for the State draws closer.
Such violence portends danger to the electoral and governance system in the country. It also gravely undermines the peace building efforts by the Federal Government in the region. “The Amnesty Office appeals to all and Sundry to keep the peace and abide by the Rules of the Electoral Game to achieve Stability in the State.
“The Amnesty Office specifically advises youths and ex-agitators not to allow themselves to be used as cannon fodders in the spiraling violence in the state. “The Special Adviser to the President on Niger Delta and Coordinator of the Presidential Amnesty Programme, Brig General Paul Boroh (Rtd) warns beneficiaries of the Amnesty programme to steer clear of violence in the region.
“He emphasizes that any beneficiary of the Amnesty Programme who is involved in any violent action should know that he would be violating the oath he took to end violence which earned him the Presidential Amnesty. As such, he warns that any beneficiary involved in violence, will be exited from the Programme, his monthly stipend stopped and will also be prosecuted.
“The Amnesty Coordinator impresses on all the ex-agitators leaders to exercise control over the beneficiaries under their leadership and warns that where a leader is found to be complicit in violence, apart from him, his camp will in addition, face sanctions.” Meanwhile, Governor Nyesom Wike has accused the All Progressives Congress (APC) and police of trying to shield the people that were caught printing fake INEC ballot papers ahead of the election.
By Solomon Isa at November 11, 2016
Email ThisBlogThis!Share to TwitterShare to FacebookShare to Pinterest