The family of the late Alhaja Kudirat Abiola, wife of the acclaimed winner of the June 12, 1993 presidential election, the late MKO Abiola, has warned the former Chief Security Officer to late military Head of State, General Sani Abacha, Major Hamza Al-Mustapha (retd), to desist from uttering statements designed to derail the course of justice with respect to the assassination of their mother.

The family, in a letter to Al-Mustapha, yesterday, signed by Mrs. Hafsat Abiola-Costello, also drew Al-Mustapha’s attention to Sergeant Roger’s “confession before the Oputa Panel,” that he
(Al-Mustapha) gave him the gun to carry out the assassination. 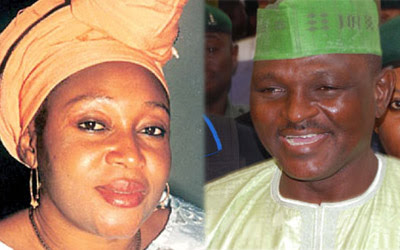 The letter to Al-Mustafa, titled: “Those who commit crimes must be punished,” said, “The family of Alhaja Kudirat Abiola read the statements you made in Ondo State in the past week, proclaiming your innocence in the assassination of Kudirat Abiola.

”It is worth recalling that you were convicted by the High Court in Lagos State. And although you were acquitted by the Appeal Court on technicalities, the case is before the Supreme Court. Your current rantings are designed to divert the course of justice.”

The family argued, “It should be noted in the context of your recent declaration of innocence that Sergeant Rogers confessed before the Oputa panel that you gave him the gun to carry out the murder of our mother. You never challenged the evidence of Rogers at the panel. The video of his confession is available on YouTube, if you need to refresh your memory.

“Justice is the only way to ensure peace, especially in plural societies like ours.”
By Solomon Isa at November 16, 2016
Email ThisBlogThis!Share to TwitterShare to FacebookShare to Pinterest