HOW KANO MURDERED MY WIFE IN MY PRESENCE- HUSBAND OLUDOLAPO ADELANA

Pastor Mike Agbahime, husband of Bridget Agbahime who was killed by an irate mob in Kano for alleged blasphemy has finally spoken up on the events that lead to his wife’s death. Agbahime in an interview with The Punch blamed Kano Governor Umar
Ganduje for paving the way for the release of the arrested suspects. 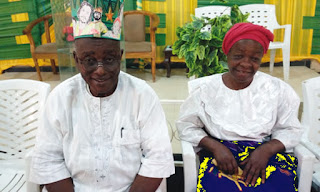 How Kano mob killed my wife, Bridget   I was in one of our shops on Thursday, June 2, 2015. We usually closed by 3:30pm and from the shop, we go to church. But there was one Dauda Ahmed, who had formed the habit of washing his legs (ablution) for prayers in front of my wife’s shop. He did that each time he wanted to say his prayers.

He would leave his shop, which was a bit far from my wife’s own, to do that. We reported the matter to the owner of the shop, one Alhaji Mustapha. Mustapha warned him many times to desist from doing that. He told him (Dauda) that if he wanted to do (ablution), he should do it in his shop.

Also, the President of the Hausa Plastic Association in Kofar Wambai market, Kano, Alhaji Aminu, also warned him when the incident was reported to him. Aminu even told Dauda that they (market union) would take him to court, if he did not change. He (Dauda) continued. Dauda was also fond of putting his goods in front of my wife’s shop in the early hours of the day.

Before she got to the shop, he would occupy the frontage of the shop with his goods. Whenever he was told to stop doing that, he (Dauda) would start uttering abusive words. On the day my wife was murdered, a call came from one of our church members (who also has a shop in the market) while I was waiting for my wife to leave the shop so that we could go to the church. He told me on phone that some Hausa people were making trouble with my wife.

I asked him why and he answered, “I don’t know.” It was then I asked him to give my wife his phone so that I could talk with her. Do you know that the (Hausa mob) did not allow the man to give her the phone? It was then that I quickly packed my wares to go and find out the problem. As this was going on, I met the same man who was with my wife at the market.

He said, “Daddy, don’t worry, they have left her (my wife).” Later, my wife appeared. She told me that it was the same Dauda that did ablution in the front of her shop. She said that she told Dauda,

“Why won’t you allow me to finish packing before you start pouring your water for ablution in my shop?” After telling Dauda this, she told me that he held her hand and asked her, “Mekai fatah?” This phrase means “What did you just say?” My wife asked him, “What right do you have to hold my hand?” She asked him to leave her hand.

She stated that if he did not leave her, that she would use one of the plastic products in the shop to break his head. Immediately Dauda left her, he started shouting “Allah Akbar.” I then told my wife that since Dauda had started his trouble again, that we should go and see Alhaji Mustapha, the owner of the shop.

Alhaji Mustapha ushered us in. He (Mustapha) told us to go and come back on Saturday, June 4, 2016, so as to speak with Dauda and settle the disagreement. His office was upstairs. But as we were leaving through the staircase, we saw a teeming mob with weapons. Alhaji Mustapha tried to disperse them.

He told them in Hausa that he would resolve the matter the next Saturday. They started abusing him, throwing stones at him. They called him kafir, meaning somebody who does not know Allah. When Mustapha saw that the mob was getting more aggressive, he opened his office, told us to go in and locked it. When they saw that Alhaji Mustapha had let us in and locked his office, they continued shouting Allah Akbar.

As they were shouting, many others joined them. It is painful to tell you that Alhaji Mustapha, seeing how aggressive they were, slumped. But before he slumped, he had called the police. The Divisional Police Officer of the area came in with two other policemen. The three could not calm the angry mob.

The mob climbed up in their numbers, broke the window, and jumped in. We were praying to God to save the situation. When they later entered the office where we were hiding, they hit my wife on the head with very heavy iron objects and she immediately slumped and died. Having completed their mission, they all went back.

They did not touch me. How Governor Ganduje and Kano Commissioner for Justice paved way for suspects’ release When the police had completed their investigations, they told me that they were ready to prosecute the suspects. But for a reason best known to the Attorney-General and Commissioner for Justice of Kano State, he refused, for five months, to file a charge against Dauda and the other arrested suspects.

To the dismay of the general public and the international community, a court recently released the suspects, declaring them innocent. It is important to note at this point that the case was in the magistrates’ court for five months without being charged to High Court.

Before the suspects were declared innocent, I went to him (Ganduje) to notify him that the suspects had not been charged to court. He said that he would do something about it, but never did. What he did was to pave the way for them (suspects) to be declared innocent of the murder case.
By Solomon Isa at November 13, 2016
Email ThisBlogThis!Share to TwitterShare to FacebookShare to Pinterest