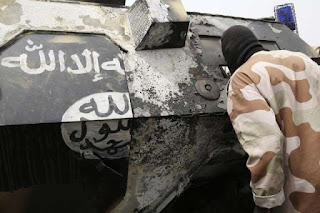 Over 240 members of insurgent group, Boko Haram, have reportedly surrendered to the Nigerian army, which is currently in a war against terrorism.    

A Chadian soldier peers into a burnt armoured vehicle, which the Chadian military say belonged to insurgent group Boko Haram, after the Chadians
destroyed it during battle in Gambaru, Hundreds of Boko Haram fighters and their families have surrendered in Chad in the past month, security and U.N. sources said, in a sign the military campaign against them is making headway, reports Reuters.

Boko Haram, which has killed and kidnapped thousands of people, had seized an area approximately the size of Belgium in northeastern Nigeria by last year but has since lost significant ground amid growing regional military pressure.

Analyst and security sources think the fighters are probably recent recruits that Boko Haram has struggled to retain as it has ceded territory. Defections of Boko Haram fighters have been reported in Nigeria but are not known to have previously occurred on such a large scale.

"The surrenders are taking place because of the firepower of our operations. The groups, many of them armed, have been arriving since September and their number keeps increasing," he said.

Some 240 fighters, most off whom are Chadian, are now being held in detention along with their families, Dole said. The MNJTF, with troops from Chad, Niger, Nigeria, Cameroon and Benin and intelligence, training and logistical support from the United States, launched a regional operation in July against the group, which has pledged allegiance to Islamic State.
By Solomon Isa at November 13, 2016
Email ThisBlogThis!Share to TwitterShare to FacebookShare to Pinterest