Retired neurosurgeon and former Republican presidential candidate Dr. Ben Carson who campaigned tirelessly for President-elect Donald Trump, has ruled out serving as part of Trump's administration, due to his lack of political experience, according to a report from The Hill. 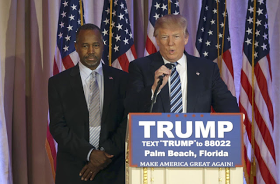 The TV host Armstrong Williams, who is a close friend of Carson, told The Hill that Carson was not interested in serving the administration in any official capacity, although he would consider a more informal role of an advisor in all White House going ons.

Williams also denied reports that Carson had been offered a role, adding that “he was never offered a specific position.”

“Dr. Carson feels he has no government experience, he’s never run a federal agency. The last thing he would want to do was take a position that could cripple the presidency,” he said.
Donald Trump himself had previously suggested that Carson would join his team, saying that he hoped that Carson “will be very much involved with my administration.”

He is now the national chairman of the My Faith Votes charity, which encourages Christians to vote.

By Solomon Isa at November 16, 2016
Email ThisBlogThis!Share to TwitterShare to FacebookShare to Pinterest