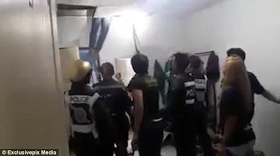 An alleged rapist, Seksan Parinyaseri, went to the extreme to avoid being arrested by the police by hiding under the roof of an apartment in Thailand after sexually assaulting a woman in her apartment. 21 year-old Seksan was said to have knocked on the door of two Vietnamese women after one of them stepped out to
make a phone call around 3am in the night on Friday and forced his way into the room, he allegedly locked the door from the inside and assaulted the second woman.   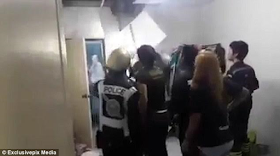 According to MailOnline, suspect Seksan, fearing capture after hearing the two women call police for help, climbed inside the ceiling through one of the loose panels to hide himself after efforts to unlock the entrance to his exit failed.  

When police arrived at the Bangkok residence he was spotted inside the roof but refused to come down - and kept scampering to different areas above the room. Cops had to poke different square ceiling tiles with a stick until he was eventually cornered and fell through the ceiling. XX Seksan was arrested by the police and charged with attempted rape, evading arrest and breaking into a private home.
By Solomon Isa at November 14, 2016
Email ThisBlogThis!Share to TwitterShare to FacebookShare to Pinterest