3 THINGS US, DONALD TRUMP WOULD BENEFIT FROM BIAFRA-IPOB 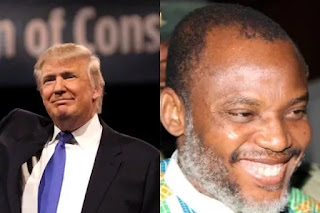 The Indigenous People of Biafra (IPOB) in a recent move have listed three thing the United States of America, President-elect Donald Trump stands to gain from Biafra – the IPOB said Trump must act fast to prevent US culpability in the second genocide on the Biafran people – The group said Trump should tell Buhari to ensure that those who perpetrated heinous crimes, and regime atrocities must be brought to book

Donald Trump and Nnamdi Kanu On Wednesday, November 9, the United States of America elected businessman Donald Trump as its President-elect. Since his victory, trump has received many congratulatory messages and advises from world leaders and individuals from all walks of life. However,
the Indigenous People of Biafra (IPOB) led by Nnamdi Kanu is not left out in this advisory team.

After felicitation from its leader, Nnamdi kanu who is currently in detention and the group itself have also moved to point out things the US under the leadership of Trump would gain by synergizing with the Biafra movement.

The Indigenous People of Biafra (IPOB) can authoritatively confirm that the outgoing Obama Administration of the United States of America have completed plans to deploy to Biafraland, five hundred (500) units of Unmanned Aerial Vehicles (UAV) popularly called “Drones” with a view to using them to bomb and massacre Biafrans under the guise of helping the murderous Muhammadu Buhari’s regime to stop pipeline vandalism.

The deployment and bombings was supposed to have started about six months ago but was put on hold because of the possible negative impact on the chances of Mrs. Hillary Clinton on the presidential election. A new date of 1st of June 2017 was later agreed as the commencement for the bombing of Biafraland because Mr. Obama was confident that Mrs. Clinton will surely win the election. Fortunately for the Biafrans, Mrs. Clinton lost the election, and Mr. Donald J. Trump won. As IPOB congratulate Mr. Trump on his well-deserved victory, we call upon him to cancel this scheduled mass-murder of Biafrans.

The reason why Mr. Trump must cancel the deployment of Drones that would be used to kill Biafrans is that it goes against the Leahy Law.

It is on record that Muhammadu Buhari has extra-judicially murdered over five thousand innocent and unarmed Nigerians within one year of becoming the president and most of those killed were Biafrans. Instead of Mr. Trump continuing with Obama’s plan to deploy Drones to exterminate Biafrans, we strongly recommend that the new president insists on Buhari obeying the rule of law and that he should practice true constitutional democracy devoid of ethnoreligious bigotry and genocidal tendencies.


“Total policy reversal on the part of the Buhari Administration; particularly in the areas of regime image and communications (i.e. moving away from regime falsehood, deceit and propaganda); trade and investment; human rights, rule of law, good governance, security and criminal justice administration. Such policy reversal must include unconditional release of Mr. Nnamdi Kanu and all other political detainees as well as de-criminalization and de-stigmatization of the Indigenous People of Biafra, Islamic Movement of Nigeria and their lawful activities. It must also include bringing to domestic or international justice those involved in various regime atrocities such as killing of over 800 unarmed and innocent members of the Islamic Movement of Nigeria (IMN) and over 250 unarmed and innocent members of the Indigenous People of Biafra (IPOB) and other Pro-Biafra campaigners as well as over 300 wounded Pro-Biafra campaigners and hundreds of members of IMN also wounded by the Nigerian Army. High profile regime atrocities’ perpetrators like Lt Gen Turkur Buratai, Retired IGP Solomon Arase and their then sub-commanders must particularly be brought to justice.”

IPOB hereby urge President-elect, Mr. Donald. J Trump, to distance himself and his Administration from the planned deployment of five hundred Drones to Biafraland which would be used to commit genocide.

1) Reduction of unemployment rate in the USA by a minimum of 2% for the next ten years because of massive rehabilitation projects that will take place in Biafra which requires American expertise,

2) Isolation of terrorist operations to the Northern region of Nigeria because Biafra is a terrorist-free nation,

3) The safest place for any American outside of their homeland USA will be in Biafra. President-elect Donald Trump and the entire United States citizens shall have everything to gain from a free and independent nation of Biafra. Signed Barrister Emma Nmezu Dr. Clifford Chukwuemeka Iroanya Spokespersons for IPOB
By Solomon Isa at November 11, 2016
Email ThisBlogThis!Share to TwitterShare to FacebookShare to Pinterest