Woman Gets 20 iphone 7s From Boyfriend, Buys a House After Selling Them 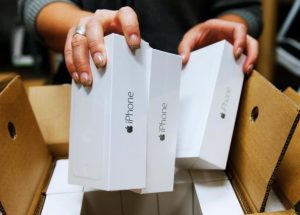 A unnamed Chinese woman has reportedly bought a house after selling 20 iPhone 7s she got from her 20 boyfriends. Her friend who was blogging under the name ‘Proud Quioba’ shared the story.

The woman who is from Shenzen, Southern China reportedly asked her 20 boyfriends for an iPhone 7 each.  

According to the BBC, she then sold the phones at £14000 and bought a house in the countryside. Proud Qioba blogged that her friend: “is not from a wealthy family.

Her mum is a housewife and her dad is a migrant worker, and she is the oldest daughter. Her parents are getting old and she might be under a lot pressure hoping to buy them a house… But it’s still unbelievable that she could use this method!” A hashtag translating as ’20 mobiles for a house’ began circulating on the site and became the country’s top trend.

“I can’t even find one boyfriend. She can actually find 20 boyfriends at the same time and even get them to buy her an iPhone 7,” one user wrote.

A company also confirmed that it bought 20 iPhone from a female client at £700 each.
By Solomon Isa at October 30, 2016
Email ThisBlogThis!Share to TwitterShare to FacebookShare to Pinterest