GIRLS FIGHTING DIRTY AT THE CLUB OVER RICH MAN


Below is a picture taken of two girls fighting shamelessly in the club . 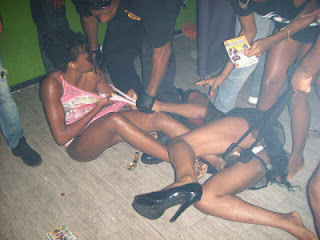 The reason why they are fighting still remains unclear , but some say they had taken so much alcohol and suddenly both lost it , while others say the two girls were fighting for
the attention of a rich man in the club .

Either way , this is a very disgraceful act from two African woman who should display class and integrity rather than trashiness. What is your take on this ?
By Solomon Isa at October 22, 2016
Email ThisBlogThis!Share to TwitterShare to FacebookShare to Pinterest