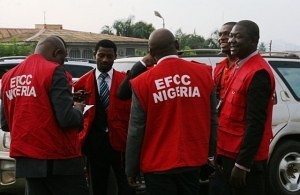   The Economic and Financial Crimes Commission has done a thorough search at the office of the National Aviation Handling Company at the Murtala Muhammed International Airport in Lagos.
It was learnt that at about 5pm on Thursday, the operatives
of the anti-graft agency arrived the complex and immediately restricted movement in and out of the premises.

The operatives conducted a thorough search on computers in some key offices, including the Audit department, which lasted for about three hours.   Junior members of staff were told to go home after the search while they questioned some senior workers. It was gathered that the raid might not be unconnected with the sacking of a senior management worker last Monday.

“They interrogated the company secretary, the head of Audit department and some heads of department, including asset management, infrastructure and cargo and the operatives didn’t leave until around 8pm,” the source said.

The key officers were summoned to report to the commission at a later date for further investigation.

The Manager, Corporate Communications and Services, NAHCO AVIANCE, Tayo Ajakaye, when contacted, confirmed the operatives’ visit. A statement which he later sent by e-mail to Punch on Sunday partly read, “Unable to meet with any of the two top company officials, they (the operatives) then requested to see the Chief Financial Officer, Mr. Bamidele Adelaja, with whom they spent some time sorting out some company documents which they were interested in.

“The CFO confirmed that he was shown a search warrant by the EFCC officials even as he added that NAHCO was always ready to cooperate with government agencies and regulators in every way and was ready to do so in the present case.

“The visit, which started around 4pm ended a little after 7pm when the operatives left with a few documents.”
By Solomon Isa at August 02, 2016
Email ThisBlogThis!Share to TwitterShare to FacebookShare to Pinterest