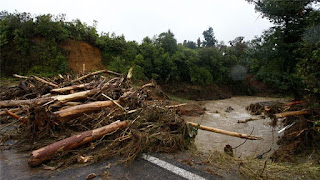 Mudslides triggered by intense rainfall in eastern Mexico killed 40 people at the weekend. Saturated hillsides collapsed on to houses in the states of Veracruz and Puebla. The head of national emergency services reported that the vast majority of deaths were in Puebla State, while the remainder died in neighbouring Veracruz.

Rafael Moreno Valle, governor of Puebla State, said dog units were searching for the missing, but the number of residents as yet not accounted for was unclear.

Mudslides were reported in the settlements of Coscomatepec, Tequila and Huayacocotla, in a mountainous region of Veracruz State. According to the state government of Puebla, 13 houses were buried in the town of Huauchinango. The rain was brought by the decaying Tropical Storm Earl.

Before striking Mexico, Earl, then a hurricane, battered Belize. Thunderstorms within the circulation brought hail that smashed car windows and punched holes in the roofs of Belize City's wooden houses. Guatemala was next in line before eastern Mexico took its turn. Rainfall was reported at between 150mm in Xalapa, Veracruz, and a possible 380mm near Mexico City. The geography of this part of Mexico makes it susceptible to channelled flash-flooding and rapid erosion. The suddenness of the rainfall on to sodden hillsides caused the many landslides.

Although Tropical Storm Earl is no more, Mexico is still under threat. More thunderstorms are likely, daily, over much of the country and another tropical storm is rolling up the west coast. Tropical Storm Javier is forecast to cross the mouth of the Gulf of California and then follow the west coast of Baja California. Here too, the main risk is sudden heavy rain. However, Javier might briefly reach hurricane strength so wind damage is also a possibility.
By Solomon Isa at August 09, 2016
Email ThisBlogThis!Share to TwitterShare to FacebookShare to Pinterest