ZIKA'S SPREAD CAN'T BE STOPPED, STUDY ARGUES, BUT IT WILL BURNOUT IN 3 YEARS 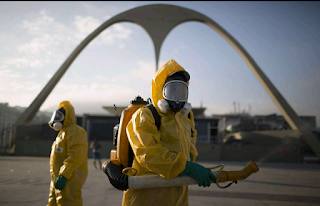 "Trying to stop the Zika virus from spreading in Latin America is probably pointless, according to a new study by medical modeling experts at Imperial College London, who predict the epidemic is likely to fizzle out on its own within three years.

The findings, published Thursday in the journal Science, used Zika data collected across Latin America, where the outbreak erupted last year in Brazil.

The study concludes that attempting to prevent Zika by eliminating the mosquitoes that spread the virus is a largely futile endeavor, because those methods haven’t eliminated dengue fever, which is carried by the same vector. In February, after Brazilian officials linked Zika to surging numbers of fetal deformities, U.N. health officials declared Zika a “public health emergency of international concern.” Nations across Latin America sent out brigades of soldiers and sanitation workers to battle mosquitoes, while urging women to avoid or delay pregnancy for up to two years. But the study argues that Zika is simply “not containable” and will simply fade away on its own once enough people develop antibodies to the virus.

“The current explosive epidemic will burn itself out due to a phenomenon called herd immunity,” according to Neil Ferguson, the lead author and a professor at Imperial College’s School of Public Health

. “Because the virus is unable to infect the same person twice — thanks to the immune system generating antibodies to kill it — the epidemic reaches a stage where there are too few people left to infect for transmission to be sustained,” he said.

More than 1,100 Americans have been infected with Zika, mostly while traveling abroad, but mosquitoes are not spreading the virus on the U.S. mainland, according to the U.S. Centers for Disease Control and Prevention. A $1.1 billion bill to increase funding for Zika prevention and research has stalled in Congress, after Democrats rejected Republican attempts to attached provisions that would restrict funding for abortion, birth control and other programs. According to U.N. officials, the epidemic already appears to be declining in South America. In Colombia, the nation with the second-largest number of reported infections after Brazil, authorities say Zika has peaked. Still, experts caution that it is too early to declare any sort of victory.

Many Zika-infected patients do not seek medical attention because they experience relatively mild symptoms, or no symptoms at all. There is no cure for the virus either, and many Latin Americans in areas with a lot of Zika know that doctors have little to offer beyond pain relievers, so they simply grit it out at home.

Ferguson and the study’s other authors argue that efforts to slow the spread of the virus through mosquito control may, in fact, prolong the current epidemic:

“Slowing transmission between people means the population will take longer to reach the level of herd immunity needed for transmission to stop. It might also mean that the window between epidemics — which we predict may be over a decade — could actually get shorter,” he said.

One concern raised by the study’s authors is that by the time a Zika vaccine is ready for testing, “by the end of the year if not sooner,” there may not be a community left in Latin America with enough cases of the virus."
By Solomon Isa at July 19, 2016
Email ThisBlogThis!Share to TwitterShare to FacebookShare to Pinterest