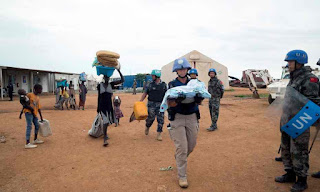 The White House said on Wednesday that it had deployed 47 troops to South Sudan to protect US citizens and the US embassy after an outbreak of deadly violence in the country.

“These deployed personnel will remain in South Sudan until the security situation becomes such that their presence is no longer needed,” the White House said in a statement. The combat-ready troops arrived in South Sudan on Tuesday.

An additional 130 military personnel currently in Djibouti are also prepared to provide support as necessary, the White House said.
By Solomon Isa at July 13, 2016
Email ThisBlogThis!Share to TwitterShare to FacebookShare to Pinterest