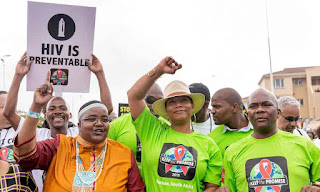 US singer and actress marches in city of Durban where grandmothers bringing up children orphaned by the disease also take to the streets .

US artist Queen Latifah gestures as she attends a march with thousands of Aids activists through the streets of Durban.

Holding up signs that read ‘I care, do you?’, about a thousand grandmothers walked in a colourful procession to draw attention to their plight, as the coastal city readies to host a global Aids conference from Monday. “Life is very difficult for us grandmothers,” said 63-year-old Thandiswa Ndovela from the Eastern Cape region, who lost two daughters to Aids and is now caring for eight grandchildren.

“I have to fend for all these children and no one is helping me out. I felt a strong need to come here and share my plight with other elderly women like me from all over South Africa.”

A second rally later in the day, entitled Keep your Promises also took place, this time bringing many young people onto the streets of Durban. They were joined by Queen Latifah and the South African health minister, Aaron Motsoaledi. South Africa has been ravaged by Aids, with about two million children orphaned by the disease, according to the UN children’s agency Unicef.   Prince Harry takes HIV test live on camera Read more Nineteen-year-old Siyabonga Khumalo from Mayville, a sprawling informal settlement on the outskirts of Durban, said he went for regular HIV tests after seeing many people die “because of ignorance”.

Britain’s Prince Harry and pop star Elton John are among the high-profile guests scheduled to speak at the five-day “Aids 2016” gathering in Durban.

  They will be joined by some 18,000 scientists, campaigners, donors and lawmakers discussing how to tackle a pandemic that has claimed more than 30 million lives in 35 years.

Prince Harry publicly underwent an HIV test on Thursday to raise awareness about combating the virus. The 31-year-old royal has made highlighting the issues surrounding HIV and Aids a major part of his public work, continuing the efforts of his late mother Diana, princess of Wales.
By Solomon Isa at July 17, 2016
Email ThisBlogThis!Share to TwitterShare to FacebookShare to Pinterest