President Muhammadu Buhari was spotted wearing a military uniform as he met with troops of HQ 1 BDE in Dansadau in Zamfara state as part of the 2016 Nigerian Army Day celebration on Wednesday, July 13. 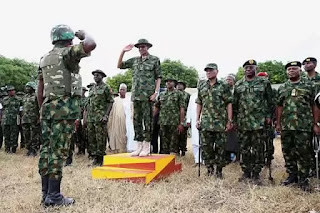 The president had earlier commissioned some road projects in Zamfara state, during his visit to some states in the Northwest region of the country.
Among those present during the commissioning were governors Abdulaziz Yari, Aminu Tambuwal, Aminu Bello Masari, Bagudu Atiku of Zamfara, Sokoto, Katsina and Kebbi states in that order.

Nigerians have however reacted to the development with series of mixed comments. While some mocked the president, saying he looks dead in a uniform, others encouraged him.
By Solomon Isa at July 14, 2016
Email ThisBlogThis!Share to TwitterShare to FacebookShare to Pinterest