The police has arrested a trader at a market in Festac town, Ikechukwu Alu for the alleged abduction and rape of a seven-year-old girl, Victoria. 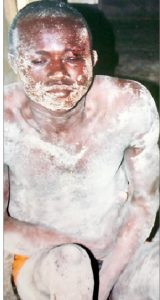 The 25-year-old suspect allegedly abducted her on Adeola Street in Amuwo Odofin, where she lives, and took her to a shop in a nearby market when the victim was looking for a recharge card she misplaced.
Alu reportedly made the girl to pass the night in the shop and allegedly raped her.

PUNCH Metro learnt that as he left the shop around 5am the following day, some residents around the area saw him, with Victoria strapped to his back. The residents queried him on how he came about the girl but he could not give a genuine explanation.

They were said to have poured ashes on him and alerted the police at the FESTAC division, who picked him up. It was learnt that Victoria told the police that the suspect “put his thing (manhood) in my bum-bum” and was subsequently taken to the Mirabel Centre at the Lagos State University Teaching Hospital, Ikeja. A test carried out on her at the centre reportedly confirmed that she was raped.

The suspect reportedly told the police that he had met the girl crying on Adeola Street and asked her what was wrong.

“She said her parent sent her to buy a recharge card, but it got missing and as a result she was chased out. I told her to follow me to a place and promised to take her home afterwards. She agreed and that was how I took her to the shop. We only slept together; I didn’t touch her,” he said.

Alu was brought before an Apapa Magistrate’s Court on one count of rape by a police prosecutor, Francisca Job. Job told the court, presided over by Magistrate A.O. Adegbite, that the offence contravened Section 137 of the Criminal Law of Lagos State, 2011.

The charge read, “That you, Ikechukwu Alu, on May 24, 2016, at about 5am at 23 Road, FESTAC Town, Lagos, in the Apapa Magisterial District, did unlawfully defile a seven-year-old girl, thereby committing an offence punishable under Section 138 of the Criminal Law of Lagos State, Nigeria, 2011.”

The defendant pleaded not guilty to the charge and elected summary trial. The magistrate, Adegbite, admitted him to bail in the sum of N100,000 with two sureties in like sum, adding that the sureties’ residential addresses and evidence of tax payments made to Lagos State must be verified by the prosecution. The case was adjourned till August 11, 2016.
By Solomon Isa at July 31, 2016
Email ThisBlogThis!Share to TwitterShare to FacebookShare to Pinterest