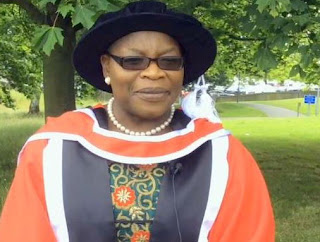 Former Vice President of the World Bank for Africa and leading voice on the global #BringBackOurGirls campaign, ObyEzekwesili, was on Tuesday conferred with a honorary degree by the University of Essex, England, United Kingdom, a statement by RED Media has said.

The former minister of education was honoured for her work in promoting transparency and accountability in government and lending a voice to the importance of the office of the citizen in a country like Nigeria.

“This is a humbling experience, I consider this so inspiring of the work that have done so far in my career and the University of Essex being one of the top universities in the world, values match those of the university and my father inspired me to be diligent and continue to learn till I reach my goal in life,” said Mrs Ezekwesili while addressing Essex Business School graduates at the ceremony.

Mrs Ezekwesili is a staunch advocate for active citizenship and a leading voice in sensitizing the government on the plight of the abducted Chibok girls. About Obiageli Katryn Ezekwesili Oby Ezekwesili, as she is fondly called, was at different times Minister of Minerals and Minister of Education under President Olusegun Obasanjo’s 2nd term.

She is a past Vice-President of the World Bank where she delivered economic policy advisory, worth over $40Billion in finance and as well as convening partnerships for 46 African countries in support of their economic and social development programs.

She is reputed to be the first woman selected for the National Honour of Commander of the Federal Republic of Nigeria in 2006.
By Solomon Isa at July 13, 2016
Email ThisBlogThis!Share to TwitterShare to FacebookShare to Pinterest