The Nigeria Police Force has dismantled an eleven-man kidnapping ring that terrorized Kaduna states and other North Central states.

The successful dismantling operation was achieved by the Intelligence Response Team (IRT) of the Nigeria Police who acted based on intelligence and technical support it received.

The kidnapping gang has been alleged to be responsible for a series of high profile abductions in recent times, including the recent abduction of the Sierra-Leonean Deputy High Commissioner to Nigeria, Maj. Gen. Alfred Claude-Nelson on June 30, 2016, and one of the Executive Directors of Dangote Group.

The gang operates dressed as military men on stop and search duty with mounted road blocks on the highways before launching a surprise attack on unsuspecting motorists.
To curtail the increasing trend of kidnapping for ransom, armed robbery and other anti-social behaviours, the Inspector-General of Police (IGP), Ibrahim Idris reorganized the tactical operations teams to tackle crime and criminality throughout the country.

This reorganization led to the arrest of this all-male gang as several arms and ammunition were recovered from them. The suspected kidnappers aged between 20 and 25 years are Rabiu Yusuf, Gang Leader, Garba Abubakar, Yusuf Adamu, Hussaini Musa and Shuaibu Idris.

Investigations are ongoing and the suspects will be charged to court as soon as it is concluded. Similarly, IGP also ordered the same Intelligence based operations throughout the federation to flush out all criminal elements.
He directed the State Commissioners of Police and Technical/Operation Commanders to improve the response rate on issues of crimes and criminality, assuring law abiding citizens of protection of their fundamental human rights. 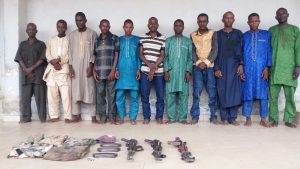