NIGERIAN GOVERNORS ARE WORRIED OVER THE ABIA STATE CONFUSION

Chairman of Nigeria Governors Forum and Zamfara State Governor, Abdulaziz Yari, has revealed that the governors in the nation are worried about the political and legal conundrum surrounding who the rightful governor of Abia state is.

The governors are also reportedly working behind the scenes to ensure that there is no breakdown of law and order in the state even as tension continues to escalate.

Addressing traditional rulers from Abia who were on a condolence visit to Sokoto over the death of Umaru Shinkafi, Yari noted that all sides claiming victory over the governorship contest, respect the courts and avoid acts that will lead to violence.

The royal fathers were led by the Chairman of both the South East Council of Traditional Rulers and Abia State Traditional Rulers’ Council, Eze Eberechi N. Dick. “As a forum, we are concerned about what is going on in Abia and we are working to ensure all sides respect the courts, and uphold peace.

Abia is known for peace, as such we should not do acts that will disturb the peace of the state,” Yari added. Sokoto State Governor Aminu Waziri Tambuwal, had earlier in his remarks said, Sokoto state has a long standing relationship with the people of the South East, and the visit of the traditional rulers on a condolence highlighted the relationship more.

Tambuwal said rather than lay emphasis on things that divide the country, all Nigerians should emphasize on those aspects that unite the nation.

“We are all on journey to unity, stability and progress of our dear country. “Abia State Governor is a very good friend of mine, so I am praying for him to overcome the present challenges he’s facing as a public officer,” he added. Tambuwal, speaking on Shinkafi, described him as a man of wisdom and integrity who enjoys the respect and admiration of all Nigerians. “No doubt, Shinkafi is the father, and architecture of Nigeria’s modern security apparatus.

His ideas and handwork gave birth to our present security structure, so he fully deserved all the enconmiums that have come his way since his passage,” the Governor added. 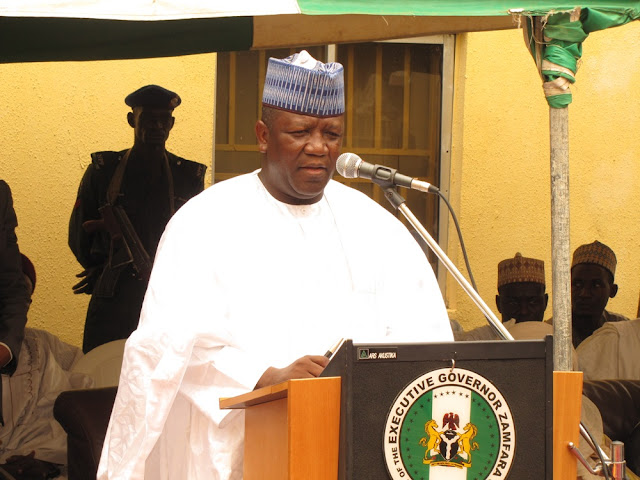 By Solomon Isa at July 11, 2016
Email ThisBlogThis!Share to TwitterShare to FacebookShare to Pinterest