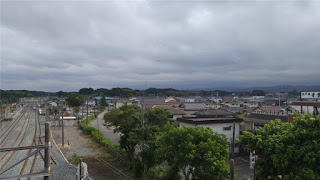  Around 20 percent of Minamisoma's residents decided to come back [Musun Kim/Al Jazeera]  by Musun Kim Producer for Al Jazeera English's bureau in Seoul, South Korea Fukushima, Japan - This week, authorities lifted an evacuation order for nearly all parts of Minamisoma city, Fukushima prefecture, allowing more than 10,000 people to return to their homes for the first time since 2011's nuclear disaster.

Tens of thousands of people across the prefecture had to abruptly leave their homes five years ago after a devastating earthquake and tsunami in Japan's northeast wrecked the Fukushima Daiichi Nuclear Power Plant.

The lifting of the evacuation order marked the largest number of people allowed back into their hometown - yet only around an estimated 20 percent of Minamisoma's 10,807 residents in 3,487 households decided to come back. 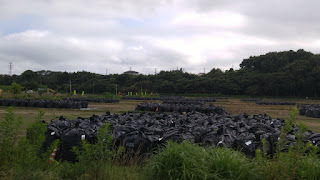 Since 2014, the government has been gradually lifting up evacuation orders within a 20km radius of the nuclear power plant, following the progress of some clean-up efforts. Our team drove to Minamisoma from Tokyo along the country's northeastern coast. It was not difficult to spot the on-going clean-up efforts.
A great number of big contaminated waste disposal bags were piled up at temporary holding areas on fields across Fukushima prefecture.   [Musun Kim/Al Jazeera] Some holding areas were massive in size, occupying huge chunk of the fields, with a string of trucks constantly dropping off black bags.

Roads into contaminated towns were still blocked by big barricades, and checkpoints were put in place to only allow people with a special permit to enter.

As we drove past contaminated areas, the reading on our Geiger counter, which measures the level of radiation, would from time to time jump above usual levels, reaching as high as 3μSv/h - the government's long-term reduction goal for areas within a 20km radius of the nuclear power plant stands at 0.23μSv/h.  
Passing through the still largely empty, yet seemingly peaceful streets of Minamisoma, we arrived at the Odaka station in the city's Odaka district.
Although the train service had been resumed for the first time in more than five years on the 9.4km stretch between Odaka and Haranomachi station, only a handful of passengers were seen during the day.    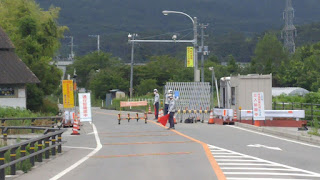 Trains arrived and departed, largely empty. What caught my attention was a large screen in front of the station, showing radiation levels in real time. The reading was 0.142μSv/h, which was higher than 0.06μSv/h in Tokyo - but still below the 0.23μSv/h government goal. Such screens were set up across the city to assuage the public's lingering concerns over radiation contamination. Over the past few years, a growing number of Minamisoma residents settled somewhere else, worried over the potential long-term health effects of a return back home. However, people who did decide to come back were trying their best to ensure that life in their hometown, albeit slowly, returned to normal.

About a three-minute walk distance from the station, we spotted around 30 young students and residents.   Japan Tsunami: Remembering the disaster five years on Preparations were under way by a number of local organisations to celebrate the opening of a community centre in a makeshift building, where residents could freely come and talk about their life back in hometown. An old lady asked passers-by to take a seat as she served local food. Young students were hanging out withtheir friends, doing hula hoop and blowing bubbles.

Many of the returnees told us that despite the uncertainties and doubts, they hoped to restore a sense of community - and thus prove to friends and families who were having second thoughts about coming back that it was worth returning home.

"Although we cannot bring back Odaka to what it used to be before the disaster, as residents here, we want to bring back its spirit and the community," 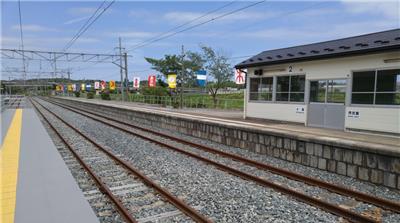 Yoshiki Konno, a local resident and the head of an NGO, told Al Jazeera. "That is the most important thing we must do."
By Solomon Isa at July 18, 2016
Email ThisBlogThis!Share to TwitterShare to FacebookShare to Pinterest