The professional wrestler turned film star is now the best paid actor on the planet. 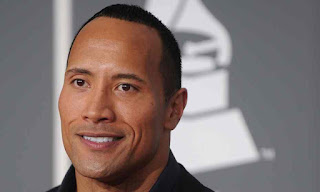 but when you think about why audiences love him, it’s not surprising   Audiences keep coming back for more of what The Rock is cooking.
Take a second to fully comprehend that.

This isn’t because film executives are scared of his 24-inch pythons – a number that seems to be multiplying at an alarming rate. It’s because, despite the many reasons his films shouldn’t work, they do and they’re massive multi-million dollar hits.

San Andreas alone fell just shy of making half a billion at the box office. If step three is profit, step one is definitely hire The Rock to act in your movie.
By Solomon Isa at July 14, 2016
Email ThisBlogThis!Share to TwitterShare to FacebookShare to Pinterest