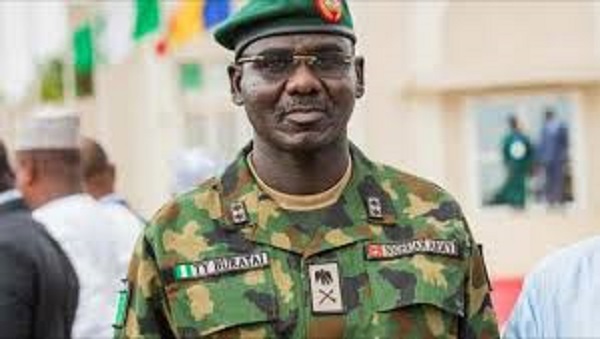 I was driving through the Central Business District in Abuja when it struck me that those concrete eyesores used to fence off many key institutions in the city have been removed and roads that were once barricaded as a result of the makeshift contraptions have been opened to traffic.

This of course does not include the areas around the Federal Capital Territory police command in Garki area of Abuja.

The barricades went up at the height of Boko Haram exploits when security organizations recognized themselves as potential target for a terror group that more or less swept down all the way from Maiduguri in the northeast, through Abuja, into Lokoja and was on the way to the nation’s coastal cities.

The barricades and the sense of siege they imposed left Abuja same as the advance of Boko Haram was halted, reversed and the terror group routed. The change came as a result of the decisive appointments of seasoned military chiefs among whom is the chief of army staff, lieutenant general Tukur Yusufu Buratai.

The exploit of the Nigerian army, in conjunction with other services, has the imprint of general Buratai written on it. My drive through the Central Business District happened to have coincided with the day general Buratai and his colleagues clocked one year in office in their respective duty posts.

In those 365 days, towns and villages that Boko Haram had captured have been liberated. In addition, several of the terrorists have been killed, captured or have simply absconded from the group.

Several commentators have put down the measure of success recorded against the terrorists to general Buratai’s ability to inspire the officers and troops to excel.

He was forefront with the troops taking part in their routine and more recently he was there with them in the trenches. He ate the ration they ate and drank the water they drank. True to his commander in chief’s order, he stayed fast with the troops, away from the comfort of the posh offices in Abuja that had made the city a choice target for Boko Haram suicide bombers.

Perhaps less obvious was the fact that general Buratai allowed another war ordered by his commander in chief to succeed. Had he been less supportive, the anti-corruption efforts that exposed the arms procurement scam might not have achieved as much. He supported the exposure of the scam and its ongoing investigation even though he knows that this would make him enemies within and outside the service. He certainly is no stranger to such battles, of wits, morals and patriotism.

The world barely knows that Buratai had faced similar challenges in the past and came out stronger.   What has changed compared to his previous battles against those opposed to transparency is that he is in a different position now. Beyond fighting for what he believes in he must also make considerations for national interest, which might have limited his ability to reply his critics.

This is why he has to again fight another battle other than the Boko Haram insurgents in the theater of war. Those whose militant commanders and fighters were defeated have moved the battle to the media and cyber space. But even on these fronts Buratai trounced his accusers who have so far not been able to do more than talk in circles, passing off conjectures as facts.

In one instance, the schemers got desperate to the point of attempting to say Buratai was in charge of the Defence Procurement report just to indict him. The plot failed as the members of the panel were sharply divided and some of them later leaked what was planned to the press. Those seeking to use the report to damage Buratai’s reputation have to beat a retreat and are still looking for another way to do battle with him. Who knows what next they plan to do.

The intensity of this hidden war is best appreciated when one realize that the whole issue is a scheme orchestrated by people close to the government. They have the resources to fabricate dirt that suits the lies they want to tell against their victim, they have the funds to throw into paid media campaigns that are tailored to look like well investigated news stories and they have the baits to dangle and recruit persons who ordinarily were regarded as esteemed opinion leaders.
This is why it seems the propaganda is getting the backing of well meaning Nigerians.

In reality, the propaganda is merely being hijacked both by yesterday men in need of rehabilitation, questionable interest groups and politically wounded corrupt politicians. There are even religious sects that are on the train for a ride to take a revenge for when their bid at extremism was decisively quashed by a patriotic army. The sinister plot is already backfiring however and God is paying the schemers back in their own coins. They are already being tormented emotionally. Serious guilt and desperation are haunting them.

As far as the law of natural justice goes they will eventually keep a date with reckoning. From the beginning of the world, when you fight the status quo, it fights back. But Buratai is driven by patriotism, loyalty and love for his commander in chief, country and humanity and therefore no amount of plotting or propaganda can defeat these ideals.

The defeat of Boko Haram would be mild compared to the disgrace these traducers will experience when Buratai eventually conquers them and their minions.
By Solomon Isa at July 14, 2016
Email ThisBlogThis!Share to TwitterShare to FacebookShare to Pinterest