6 REASONS WHY SENATE MAY IMPEACH BUHARI 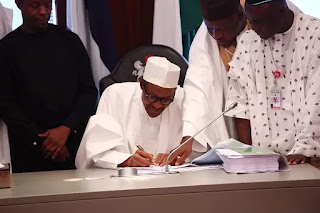 However, later the people who were accused of plotting against the president denied the reports. Nigeria, like most democratic societies, has one of such mechanisms and this is known as “Impeachment or removal”.

According to the Nigerian Constitution, the president or vice president may be removed from office in accordance with the provisions of 143 section, chapter six, part one: “Whenever a notice of any allegation in writing signed by not less than one-third of the members of the National Assembly:-
“(a) is presented to the President of the Senate;
“(b) stating that the holder of the office of President or Vice-President is guilty of gross misconduct in the performance of the functions of his office, detailed particulars of which shall be specified,

Below are six reasons why the senators may be forced to gang up and teach the president a major lesson ”this is democracy not military rule:

1. To save Senate president Bukola Saraki Since Saraki became the citizen number three in the country against the wish of his party there have been multiple attempts to remove him. Now the Senate president is one of the most controversial politicians in Nigeria. His troubles appear to have no regard for his position.

2. Alleged Northern agenda Some prominent and high ranked Nigerians believe that President Buhari is on a mission to northernize Nigeria.   Buhari’s political appointments have raised key questions about the country’s unity. Some regions are crying for restructuring of the country.

The president is reportedly fast losing even the support of Northern senators some of whom have openly accepted that his appointments have been lopsided. But the presidency restated its determination for one united country.

3. Disregard for the Senate Senator Biodun Olujimi cried out:

”It’s time to call a spade a spade and the Nigerian Senate and legislature deserves to be respected.”

The outcry cry was initiated by a recent remark by Buhari’s highest ranking nominee SGF Babachir Lawal on the National Confab and Intervention Projects.

APC warns Saraki, Ekweremadu others Some Buhari’s men have shown gross disregard for the Nigerian senate and the senators seems to get tired of being disrespected.
4. To save their seats The Nigerian economy is plummeting and the average Nigerian on the street is getting more disgruntled by the day. Most people on the streets blame the incumbent president for the hardship. People are more and more dissatisfied that Buhari is ”fighting corruption” while allowing his people to starve.
5. Handling of the budget There have been rumours of major budget padding during the previous government. Nigerian senators reportedly extort the executive before any budget is passed.

The 2016 budget was almost passed in the same way until stories of budget padding leaked to the media.

6. Anti-corruption crusade Muhammadu Buhari was elected on the promise to fight corruption. Since his inauguration in May, 2015, many politicians were accused, arraigned and even detained on the corruption charges. Saraki, himself, is currently facing the trial for false declaration of his assets.
By Solomon Isa at July 15, 2016
Email ThisBlogThis!Share to TwitterShare to FacebookShare to Pinterest